The Foragers - Ant you glad you read this! (UK Ant Blog) 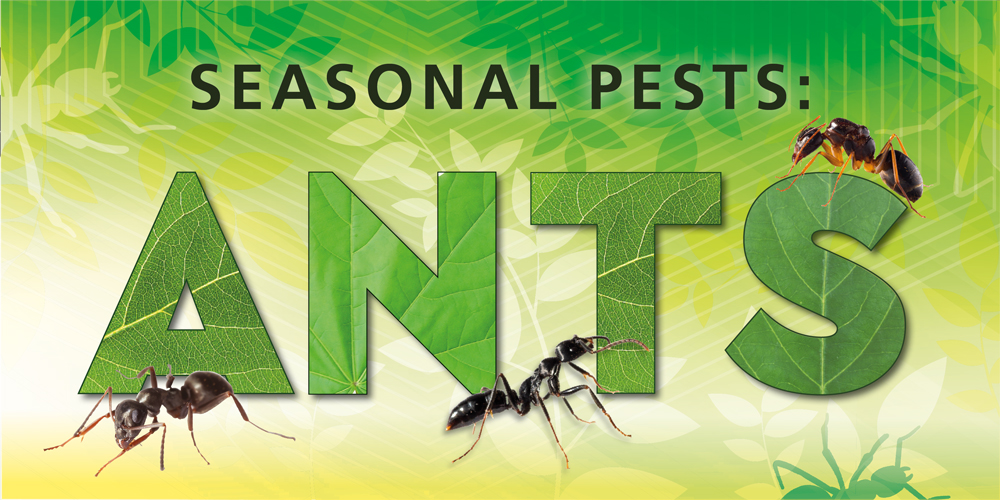 We are literally outnumbered by these little guys, it is estimated that there are 1 million ants to every human on earth. The resilience of this Insect family is quite incredible, and probably the reason they have managed to colonise nearly every land mass on earth. Some particular species are able to lift 50 times their body weight and their ability to work as a team and solve complex problems has been key to this species survival.

We are well into ant season, and as the weather warms it becomes that time of year again when these six legged creatures begin to start pestering your clients. They do this predominantly by ruining our Lawns or invading our kitchens in search of food. In this blog we are going to run through typical UK Ant Species, Biology, habitat and some methods of treatment to ensure you’re equipped for any Ant job you might come up against this Ant season.

There are more than 12,000 species of Ants on planet earth, however there are probably three main Ant species we come up against in the UK. Those being the more common Black/ Garden Ant, and the less common Pharaoh’s Ant and Ghost Ant. All three can provide different and difficult challenges for the Pest controller. 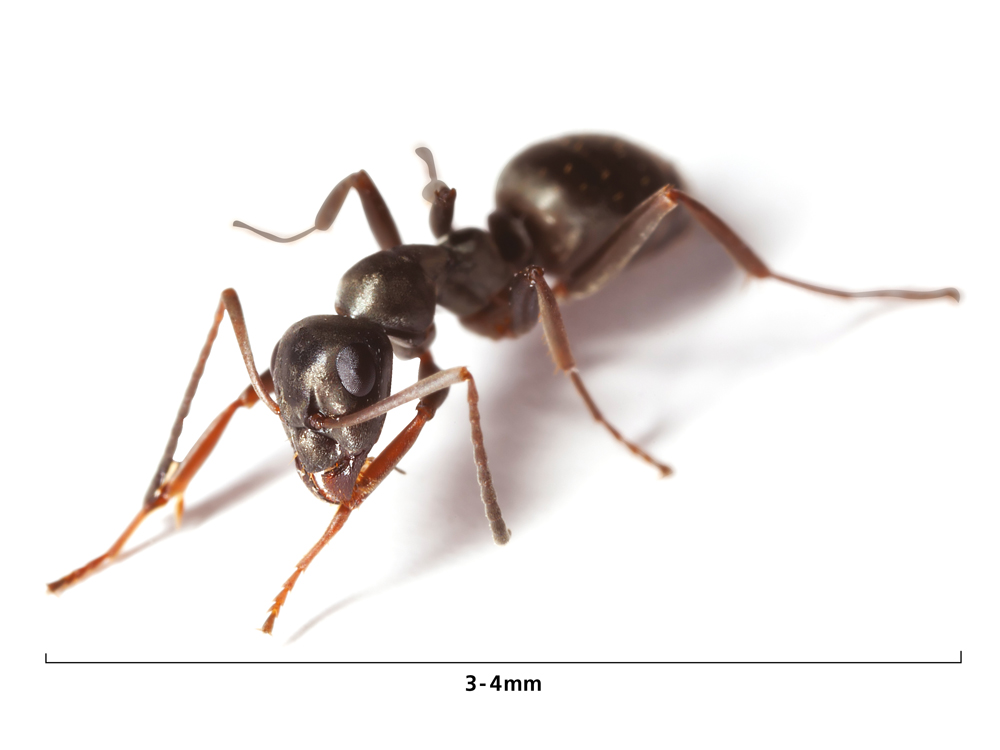 Probably the most common Ant we encounter in the United Kingdom, is the Black or Garden Ant. These small but powerful pests are widespread across the UK and whilst not considered to transmit serious disease, they may still walk across or through unclean/ unsavoury areas during they’re foraging exercises possibly contaminating human foods.

Habitat is typically outdoors, under lawns, patios, in foundations or occasionally within buildings. Only one queen per nest, workers forage on a range of different foods Including seeds, insects, sweet substances and aphids secretion (honeydew). Nests can last for many years, however young queens leave the nest as flying Ants and will branch out and start new nests each year.

An Ant lifecycle is a complete metamorphosis starting from an Egg – Larvae – Pupa – Adult, The beginning of a new colony starts with winged male and female ants mating, the new queen then begins her new nest by digging into the ground and begins to lay a large amount of eggs, these eggs will later emerge and become the first generation of the colonies worker ants, these newly emerged workers ensure the nest has enough food to survive and ensure its growth by maintaining and attending to the queen and next generations every need.

Control of Lasius Niger in buildings, initially starts with good housekeeping like most pest problems, are there any access points you can mastic / cement or block up. This can be supported by a residual insecticide treatment to create a protective barrier around the property, a Bendiocarb dust or spray (Ficam) can work well.

Outdoor nests can be treated with insecticides if deemed necessary however the issue tends to be with penetrating the whole nest, any survivors may be encouraged to move to another nest site just moving problem form one area to another. Therefore in these situations gel bait formulations can work well, as you can kill the nest from inside out, foraging ants will take the bait back into the nest for rest of colony to feed from. Approved Professional use gel baits available include Formidor, Maxforce Quantum 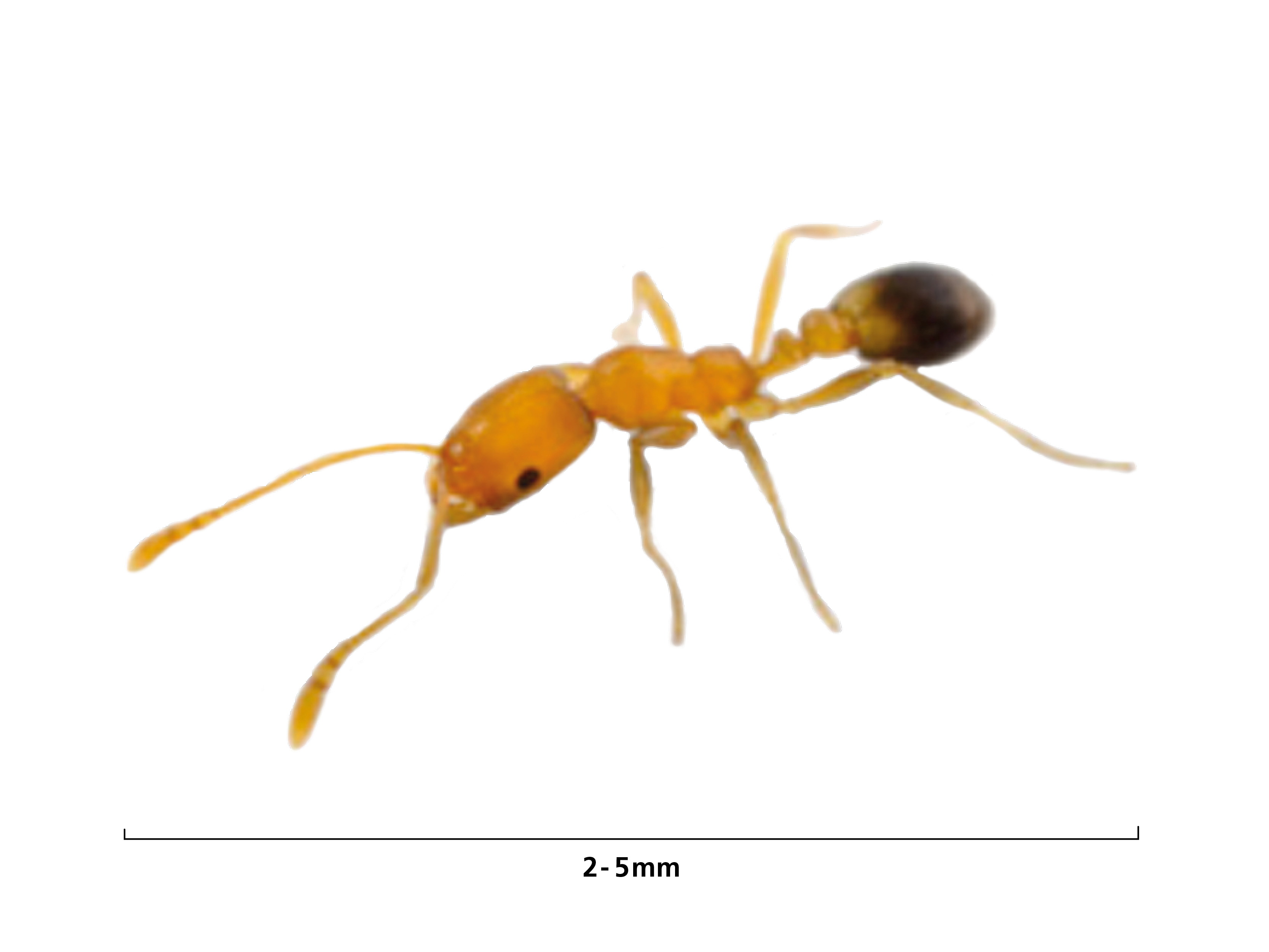 A species from the tropics and subtropics that particularly favours warmer climates, therefore more likely to be found inside buildings. Multiple queens can mean this particular species of ant can be difficult to control if not done correctly.

As mentioned above this species thrive in warmer climates, therefore in the UK they tend to dwell inside heated buildings, usually multi occupancy buildings, prisons and hospitals are common locations of nest areas as well. The nests tends to be unstructured and different to the Black Ant. Pharaoh’s Ants have multiple queens, this can make control difficult as if the nest feels threatened then the nest uses a defence technique called “budding” where the other queens will move on to create satellite colonies in other areas of the building, meaning one colony can become several quite quickly. This species requires a water source meaning sometimes they can venture into drains and unsanitary places, which can create a risk of disease transmission.

Life cycle: All Ants have a complete metamorphosis, this particular Ant develops in temperatures between 18-30 degrees Celsius and the queen ants usually don’t leave the nest. The workers again support the nest by foraging for food and maintaining the nest.

Control of these ants can be particularly difficult especially with their tendency to “Bud off” into satellite colonies if under unusual stress or threat. Therefore successful control can only usually be achieved by baiting techniques not residual treatments. Maxforce Quantum is approved for the control of Pharaoh Ants. Slow acting Poisons like Maxforce Quantum allow the workers time to take poison back to the nest and in essence kill it from the inside out. 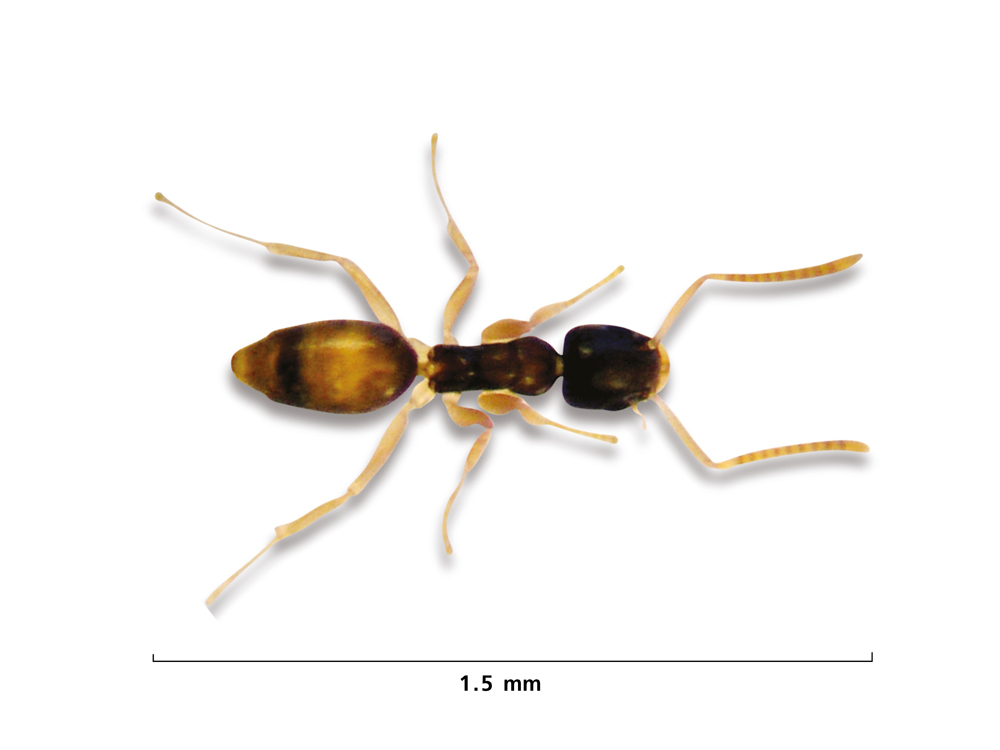 Ghost ants are probably the smallest ant of the 3, and is very similar to the Pharaoh’s Ants; although not from the same sub family, treatment and general biology of these two Ants is very similar.

Ghost Ants are similar to Pharaoh’s Ants with multiple queens and favours to warmer dwellings between 18 to 30 degrees Celsius. Ghost Ant’s will forage on a wide range of foods and need access to a water source, meaning they can travel to/ through unclean or unsavoury areas looking for a water source, increasing the risk of disease transmission. Unstructured nests again typically found in cavity walls or heating ducts, these nests can be encouraged to spread if disturbed due to the Ants budding off into satellite colonies.

Between 5-10% of workers actually engage in foraging activities, and unlike the Black Ant, mating takes place within the nest between fertile males and females. The colonies tend to be moderately sized with up to several thousand members.

Control again with this species can be very difficult due to “Budding”, this makes residual treatments relatively ineffective, therefore the most effective method of control is slow acting baits (Gel baits) as mentioned in Pharaoh Ant Control above this allows workers time to take back to nest and treat all members of the nest not just foraging workers.

Other Species we come across are the Argentine Ant, Crazy Ant, Acrobat ant which my colleague covered in detail in a recent blog (Link Below). If anyone would like me to do a blog covering these not so common Ants, please give me a call or send an email and I can write one for these in the future.

To summarise, Ants are incredible creatures and potentially a difficult adversary for a Pest Control Technician if not identified or approached correctly, I hope this blog gives you a small insight into how UK Ant species work and how to regain control, any further questions please don’t hesitate to contact me directly, details below.