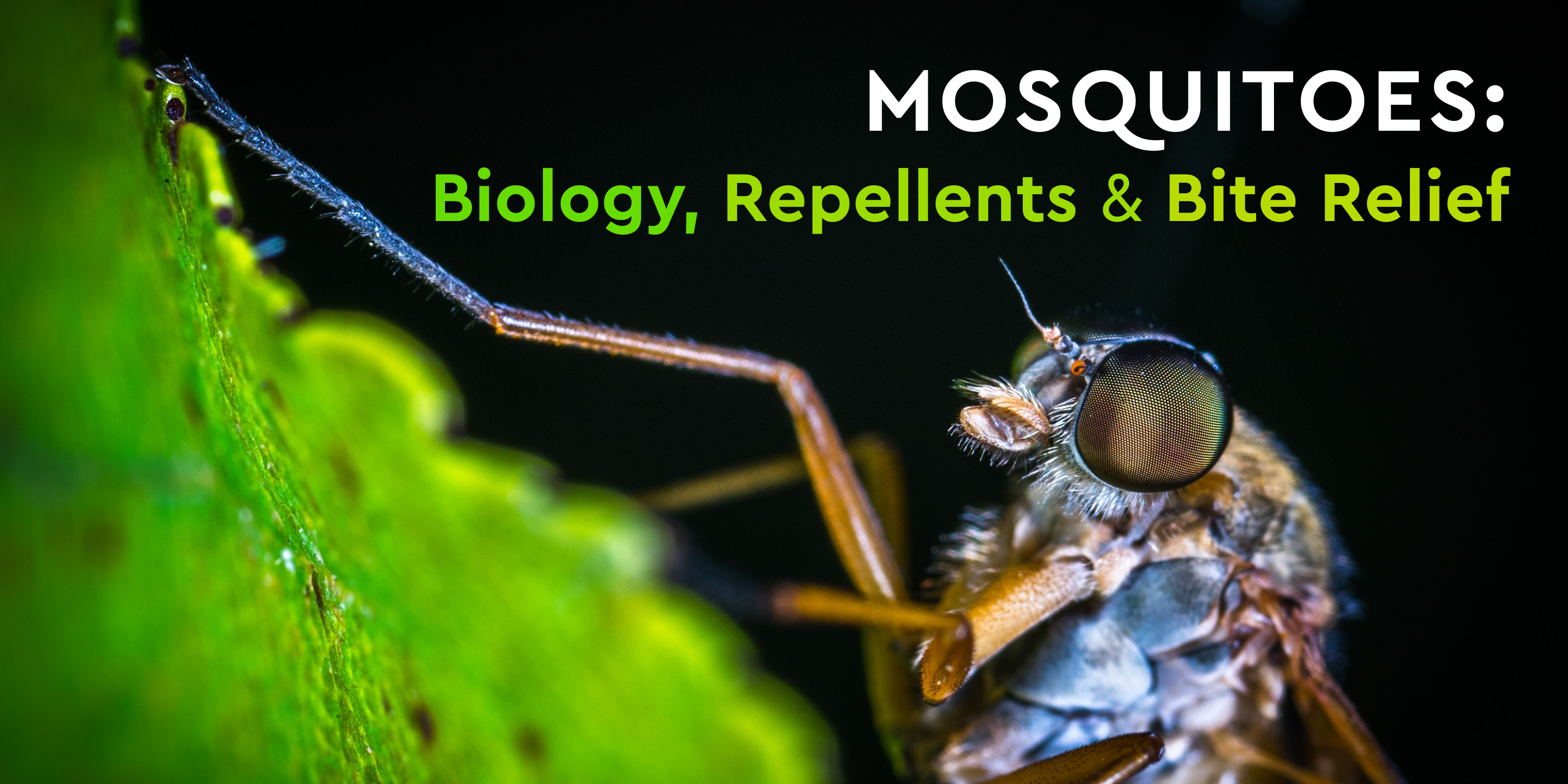 Nothing ruins a perfect summer evening like the whine of a mosquito in search of a warm meal. There are 176 species of these annoying insects in the United States and more than 3,000 species throughout the world, according to the American Mosquito Control Association (AMCA) — enough to ruin any number of picnics by the pool.

These little pests are considered the most deadly animals in the world and contribute to close to a million deaths per year, according to an article in Smithsonian magazine. This is not because of the itchy bite, but mainly because of the diseases transmitted by the bite.

Mosquitoes belong to a family of flies called the Culicidae. Not all species suck blood, but many of those that do can transmit diseases, including West Nile virus and yellow fever. Even disease-free mosquitoes are irritating because of their saliva, which causes an allergic reaction in the form of an itchy red bump.

Because of mosquitoes' nasty bites, it's a good idea to try to keep these insects at bay. Luckily, there are many strategies you can use to do so.

Mosquito control may target biting adults, or it might aim to kill the insect's larvae and eggs. The mosquito life cycle has four stages:

Adult female mosquitoes have a specialized mouthpart designed to pierce skin and siphon off blood, according to the Mayo Clinic. As it bites you, the mosquito injects saliva into your skin that triggers a mild immune response characterized by itchiness and the formation of a painless bump.

In a 2018 study, published in the journal PLOS Neglected Tropical Diseases, researchers from the Baylor College of Medicine in Texas injected baby mice with human hematopoietic stem cells — which later turn into various types of blood cells, including immune system cells — that were taken from umbilical cords. When the mice grew up and had a well-established "human" immune system, the researchers held an open vial of mosquitoes against the footpads of each mouse. The insects bit each mouse around four times. By analyzing blood bone marrow, skin and spleen cells from the mice, the researchers found that a number of immune cells remained active even seven days after the mice were bitten.

According to the Mayo Clinic, other common symptoms of mosquito bites include:

Once you've been bitten by a certain species of mosquito, your body will produce specific antibodies to the saliva of that mosquito species, according to Jonathan Day, a professor of medical entomology at the University of Florida. This means that the more you're bitten by a species of mosquito, the less likely you are to react, Day told Live Science.

This is why young children — who have less experience with mosquito bites — are more likely than adults to show noticeable symptoms of a bite, Day said. When a child is bitten, the bite may appear swollen and can sometimes feel hot to the touch.

If your immune response to a mosquito bite is particularly strong and uncomfortable symptoms develop, a doctor may advise you to take an oral antihistamine, such as Benadryl or Claritin, according to the Mayo Clinic.

In rare cases, people may have a whole-body allergic reaction to mosquito bites known as anaphylaxis. According to the National Institutes of Health (NIH), symptoms of anaphylaxis include:

If you experience any of these symptoms after being bitten by a mosquito or any other insect, you should seek medical attention immediately.

Most mosquito bite symptoms will disappear within a few days and don't require medical treatment. Applying a cold compress to the bite may sooth the itching.

However, if you still find the itchiness of a bite uncomfortable, you can either apply calamine lotion or a low-strength hydrocortisone product — usually a cream or spray — directly to the site of the bite, according to the National Institutes of Health (NIH).

Calamine, a mixture of zinc and iron oxides, helps relieve itching. Hydrocortisone is a steroid that reduces redness, itching and inflammation. Low-dose treatments containing this steroid can be bought over the counter and are generally safe for most people to use without a prescription. However, you should consult with your physician before using products containing hydrocortisone if you are pregnant or nursing or if you plan to use the product on a child under 2 years of age, according to the National Eczema Association.

In the United States, there are several diseases that are regularly spread by mosquitoes, according to the American Mosquito Control Association (AMCA). These include:

People who travel outside the country and return home infected with a mosquito-borne disease can also spread these diseases in the United States. In recent years, this phenomenon has been witnessed in places like Florida and the Northeast United States, where returned travelers have played a role in the spread of Chikungunya virus, which is endemic to areas of the Caribbean, according to the Centers for Disease Control (CDC).

Zika virus is also a recent concern. It is related to West Nile and is spread through mosquito bites. "Those who do feel ill may experience fever, rash, joint pain and red eyes (conjunctivitis)," Dr. Robert Amler, vice president for government affairs, dean and professor of public health and professor of pediatrics and environmental health science at New York Medical College in Valhalla, New York, told Live Science. "These symptoms are usually mild and last only a few days or up to one week."

This disease can be passed from mother to developing infant. "The greatest risk of Zika complications might be to newborn babies," Amler said. "Although a definite cause has not been proven, a sizeable increase in newborns with microcephaly, a serious birth defect, has occurred in Brazil in babies born to mothers who were infected during their pregnancies with Zika virus. Zika virus infection also may be associated with Guillain-Barre syndrome in adults, a serious form of paralysis."

Many mosquito-borne diseases can cause serious illnesses and even death, which is why mosquito-prevention measures are so important. Those who become ill with a mosquito-borne disease should avoid mosquito bites, especially during the early stages of their illness, according to the CDC. This will help limit the spread of the disease to others. Each mosquito-borne disease is different and causes unique symptoms, but some common symptoms of such diseases include fever, fatigue, swollen glands, rash, headache and body ache.

Mosquitoes are more attracted to some people than others. There are a number of reasons for this, and there are a number of steps you can take to keep mosquitoes at bay. The first step is easy: try to relax. Mosquitoes are more attracted to people who are expending a lot of energy, according to Day. The increased production of carbon dioxide (from breathing heavily) and lactic acid (a byproduct of increased physical activity) draw mosquitoes to you, Day said.

Other than taking it easy, those wishing to prevent mosquito bites should cover up, Day said. Wear long sleeves and pants that cover as much of your skin as possible. The technical protective fabrics worn by runners or boaters are good choices for those who want to cover up without overheating, Day said.

Aside from covering your skin, you can also try to avoid mosquito habitats — like wetlands and forests — when mosquitoes are most active, which for many species is at dawn and dusk, according to the AMCA. But if you need to be outside when mosquitoes are looking for a meal, you may want to use insect repellant to deter the insects from biting you. Day recommends using a repellant that contains 5 to 7 percent DEET, a chemical compound that wards off mosquitoes. At this low concentration, DEET repellants typically need to be reapplied every 90 minutes or so, according to the AMCA. DEET is effective when sprayed directly onto skin or clothing. Higher concentrations of DEET can also provide protection against ticks.

If you're concerned about using DEET on yourself or young children, you can also use products containing essential oils, known as botanicals, Day said. Several botanical repellants are registered with the Environmental Protection Agency (EPA), including Repel, a product that contains oil of lemon-eucalyptus.

There are also several other ways to prevent mosquito bites, according to the AMCA. These include:

The EPA lists several larvae-killing pesticides that are effective at controlling mosquitoes. Insect growth inhibitors such as methoprene prevent larvae from developing into adulthood. Temephos, a chemical that affects the nervous system of insects, can be applied on standing water where mosquitoes breed. Oils applied to puddles can also break up the surface tension that keeps eggs and larvae afloat. Finally, bacteria of the genus Bacillus disrupt the digestive system of insects, ultimately starving them to death.

When shopping for repellants and other devices to keep mosquitoes at bay, consumers should do their research to ensure that the product they're purchasing has proved effective at warding off these pests. Clinical studies have shown that some products, like ultrasonic devices that emit high frequency noises, do not effectively repel mosquitoes, according to the AMCA.

Mosquito traps often use carbon dioxide or heat to lure the annoying insects in, but scientific studies on their effectiveness are rare, according to the AMCA. A 1996 study in the Journal of the American Mosquito Control Association found that citronella candles and incense did reduce bites under natural conditions, but only by 42 percent and 24 percent, respectively. A 2011 study in the journal of Tropical Medicine & International Health found that citronella candles in indoor tests repelled only 14 percent of mosquitoes. Citronella diffusers (which release more concentrated oil) performed slightly better, repelling 22 percent of female mosquitoes up to 20 feet away.